Respected Jeffersonville businessman and politician Valentine Scheidell was the man chosen as the first president of The First National Bank of Jeffersonville. Scheidell was born in Jeffersonville on September 26, 1869, and grew up in the community where his grandfather, Frederick, had been one of the earliest settlers, operating a grist mill beginning in the 1840s. His father, also named Frederick, was longtime town of Callicoon Supervisor. Valentine Scheidell was involved in a number of business ventures over the years, including serving as the vice president of the unsuccessful Warrior Gold Mining Company of Liberty. In 1904, the company purchased 311 acres of land on the western slope of the Shawangunk Mountains near Ellenville which they believed contained a large amount of ore made up of considerable percentages of gold, copper, zinc, and lead. Not enough ore was ever found to make the mine commercially viable.

Scheidell, a Democrat, succeeded his father as Supervisor of the town of Callicoon beginning in 1898, becoming the Sullivan County Board of Supervisors youngest member, and later served as the Chairman of the Board. After many years in office, he declined his party’s nomination to run again in 1913, citing as his principal reason the fact that “the duties imposed upon him as supervisor had so multiplied that he found no time to devote to his private interests.” 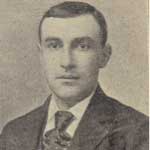 In addition to his role in establishing the community’s new bank, he was in the creamery business with his uncle Charles Scheidell, and had purchased a number of failed creamery operations in the region in 1912, opening an office in Jeffersonville to run them. The Livingston Manor Times reported in its April 4, 1912 edition that “at the sale of the creameries of the Dairy Products Company which took place in Monticello Tuesday, Valentine Scheidell of Jeffersonville purchased the bulk of the creameries offered. Those properties included the Jeffersonville, Youngsville, Kenoza Lake, Callicoon and North Branch creameries. Last week in New York, Mr. Scheidell purchased the Galilee and Lookout, Pa., creameries.”

Something is wrong please try again.
×