The year is 1913. Woodrow Wilson becomes the 28th president of the United States. The 16th Amendment to the U.S. Constitution is ratified, authorizing the federal income tax. And a redesigned Grand Central Station reopens in New York City, as the largest train station in the world. 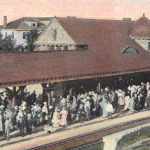 It is a pivotal year in Sullivan County, as well. It is the peak year for passenger travel on the Ontario & Western Railway, which feeds the county’s major resorts. The decline in travel in subsequent years would signal the end of what had been nearly a quarter of a century of prosperous tourism in the area. And a disastrous fire strikes the village of Liberty on June 13th—Friday the 13th— destroying nearly half of the village’s business district.

Meanwhile, the small community of Jeffersonville, home to about 500 people, is poised to get electrical service for the first time. And The First National Bank of Jeffersonville receives its charter and unveils plans for a newly constructed, state-of-the-art, fireproof building on the corner of East Main Street and Maple Avenue.

The saga of The First National Bank of Jeffersonville began when five local businessmen – Louis P. Faubel, Henry U. Krenrich, Otto W. Meyer, and Charles and Fred Schmidt – applied for a charter to establish a local bank. At that time, most people in the community who utilized banking services did so either in Callicoon or in Liberty.

On August 28, 1913, Jeffersonville’s weekly newspaper, the Sullivan County Record, ran a story on its front page announcing that the petition for the bank had been granted.

“The comptroller of the currency has granted the application for the organizing of The First National Bank of Jeffersonville. The directors and officers of the bank have not yet been selected, but in all probability the president will be Val Scheidell, who is the moving spirit in this enterprise as he is and has been in all other important projects in this community. Plans are being completed for the new two story concrete bank building which is to grace the northeast corner of East Main Street and Maple Avenue.”

When the first directors and officers were chosen on September 8, Valentine Scheidell, businessman, entrepreneur, and longtime supervisor of the town of Callicoon, was indeed chosen as bank president, while William B. Vorhees of Roscoe was selected vice president and Charles Schmidt cashier. Other directors included: William F. Heinle of Cochecton Center; Grover M. Hermann of Callicoon; George DeLap of Kenoza Lake; and Otto W. Meyer, Henry U. Krenrich, and Robert B. McGinn, of Jeffersonville. These men served until the first annual meeting of stockholders was held the following January. 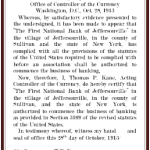 On October 28, 1913, The First National Bank of Jeffersonville was officially authorized to do business by Thomas P. Kane, the acting Comptroller of the Currency. The official announcement was published in the Sullivan County Record for a number of successive issues later that year.

On Monday, January 5, 1914, The First National Bank of Jeffersonville opened for business in its still unfinished building on the corner of East Main Street and Maple Avenue. The bank’s counters and desks had been delayed in shipping and temporary partitions and desks had to be pressed into service. Seventy-five accounts were opened the first day, and nearly $10,000 in deposits was received. The Sullivan County Record reported that was “considered very favorable for this time of year.” More than $20,000 was deposited in the six days of the bank’s operation.

“The first depositor was George DeLap of Kenoza Lake. As George engineered the construction of the fine bank building, it is but natural that he would wish to be the first depositor…The finishing touches were put on the interior walls of the bank building this week. The exterior will be finished up with a wash when warmer weather permits. Joseph Rapp, marble cutter, on Tuesday finished the job of carving the name of the bank in raised letters across the front of the building.” 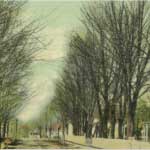 The new bank building featured hot water heat, electric lights, and modern plumbing fixtures. There was no exposed woodwork in any part of the building, which was supposed to make it virtually fireproof. The second story featured four offices, and the highlight of the building was an Ely-Norris Safe from the Remington-Sherman-Ely-Norris Safe Company of New York City that was considered burglar proof. The safe included a three ton manganese steel vault door with a double time lock.
When the new bank’s stockholders held their first Annual Meeting on January 13, 1914, a new, expanded slate of directors was elected, and in addition to the original nine, Jeffersonville physician Dr. J. Cameron Gain, John Townsend, one time Neversink Supervisor Dr. W.H.H. Hoar of Grahamsville, Judge George H. Smith of Woodbourne, and Michael E. Galligan of Forestburgh were chosen. The Record editorialized that the group “represented every section of the county, which augurs well for the prestige and prospects of the new bank.”

Something is wrong please try again.
×