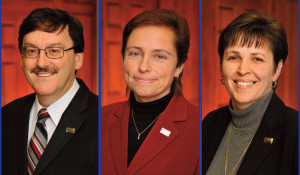 Jeffersonville, NY (April 7, 2016) During Jeff Bank’s Annual Organizational Meeting, which was held on Tuesday, February 23rd, the Board of Directors promoted John Russell and Tanya Hahn to the role of Executive Vice President and Linda Fisk to Vice President.

John Russell currently serves as the Chief Financial Officer, a role he has held since 2009. Mr. Russell is an active member in the community and serves as a Director for Cornell University Cooperative Extension of Orange County and the Port Jervis Community Development Agency.

Linda Fisk has been a part of the Jeff Bank team since 1992 and is currently the Branch Manager of our Liberty and Livingston Manor Branches, a role that she has held since 1998. Mrs. Fisk is a member of the Livingston Manor Chamber of Commerce and a Board Member of Sullivan County BOCES.

“We are extremely fortunate to have dedicated and experienced individuals such as John, Tanya, and Linda on our team,” said George W. Kinne, Jr., President and CEO. “They are all critical members of our Bank and their exceptional leadership will help our growth and success in years to come.”

About Jeff Bank
Jeff Bank is an independently owned bank that is headquartered in Jeffersonville, NY. The Bank is an FDIC insured corporation that provides deposit and lending products in twelve full-service branches throughout Sullivan County. Jeff Bank has remained a trusted community bank since 1913. Find out more information at www.jeffbank.com.