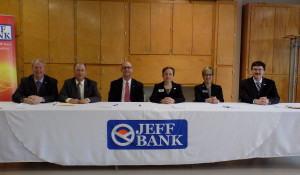 The financial information dispensed by the executive management team, which included a net income of $4,708,000 in 2015, was well received by the 75 shareholders in attendance. “The year 2015 was another profitable year with strong performance in major profitability metrics,“ stated George W. Kinne, Jr., President and CEO. “With the opening of our new branches in Port Jervis and 18 Anawana Lake Road in Monticello, I believe that 2016 will be another solid year for Jeff Bank.”

About Jeff Bank
Jeff Bank is an independently owned bank that is headquartered in Jeffersonville, NY and was founded in 1913. The Bank is an FDIC insured corporation that provides deposit and lending products in twelve full-service branches throughout Sullivan County. Jeff Bank – Still Banking Strong! Find out more information at www.jeffbank.com.